Last Sunday…what a nice memory… I was in London having lunch with my friends Stefania and Irene at the inSpiral Lounge in Camden.

I discovered the brand in an organic food store in Milan, I bought some of their incredibly good kale chips and became immediately one happy and loyal customer. 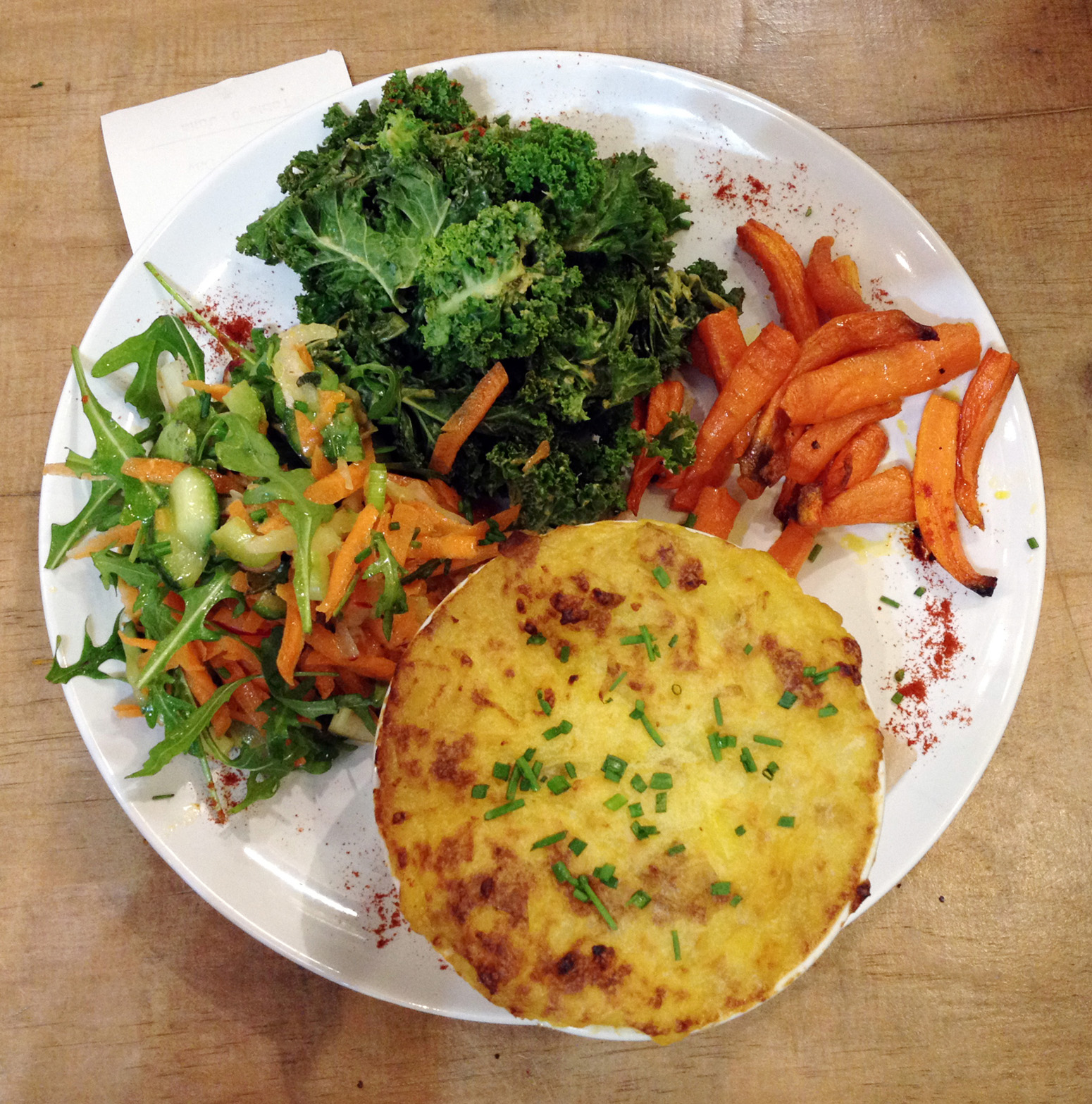 Camden is one of those must-see places in London, so unique and different from everything else around.

The inSpiral Lounge is multi-award winning vegan, organic and gluten free eco-café that overlooks the famous Camden Lock waterside and serves delicious food that can be raw or cooked.

I was told by the staff that the story of the popular Kale Chips started seven years ago right in this café and today it has become a thriving business called inSpiral Visionary Foods.

Founded in 2010 and in just four years,  InSpiral Visionary Foods created an entire range of Kale Chips, granola, bites, crackits, cakes, and superfoods. In 2013 they lined the roof with solar panels, achieved the organic certification for all of their products and switched their kale chip packaging to 100% compostable materials.  These new eco packs have been described as a ‘world-first’ in ecological design. Can I say ….U-A-O ! These guy are committed to what they do, they have a vision, they work all for it and never forget to have fun along the way.

As a starter, I decided to take one superfood Green smoothie called the Green Queen and well, the name was due. A nice blend of mint, avocado, chia seeds, activated almond, dates, spinach, wheatgrass, spirulina and liquid chlorophyll.  It was dense, it was thick, it was incredibly good and fully reinvigorating.

As daily specials on Sunday, they had the vegan chickpeas and spinach shepherds pie. It looked delish but in the end I got tempted by the Luxury Roast Dinner, vegan and gluten free. 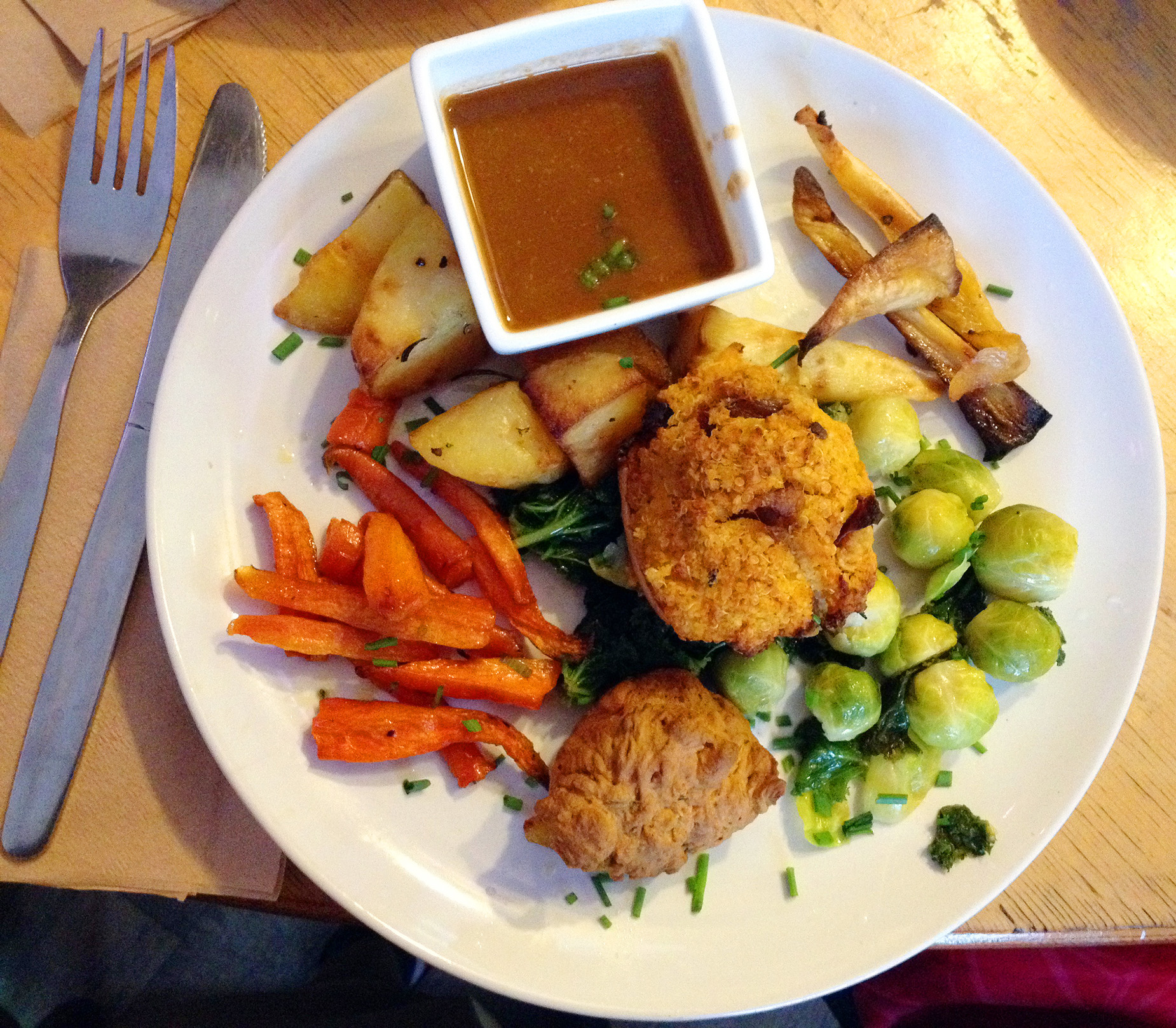 The roast was made of quinoa and macadamia nuts stuffed with a juicy butternut squash, gluten free yorkshire pudding, roast potatoes, steamed kale, Brussels sprouts, caramelized carrots; all served with a reishi mushroom gravy. I was happy with my choice, it was very good.

We were also lucky to be given to try some Kale Chips with raw chocolate and cinnamon …delicious!

As dessert, well well well, what about a vegan gluten free cheese cake ?!

I had no more space left in my belly but I hardly say no to dessert, so I decided to take mine home with me and enjoyed it for breakfast the day after.

It was very good! 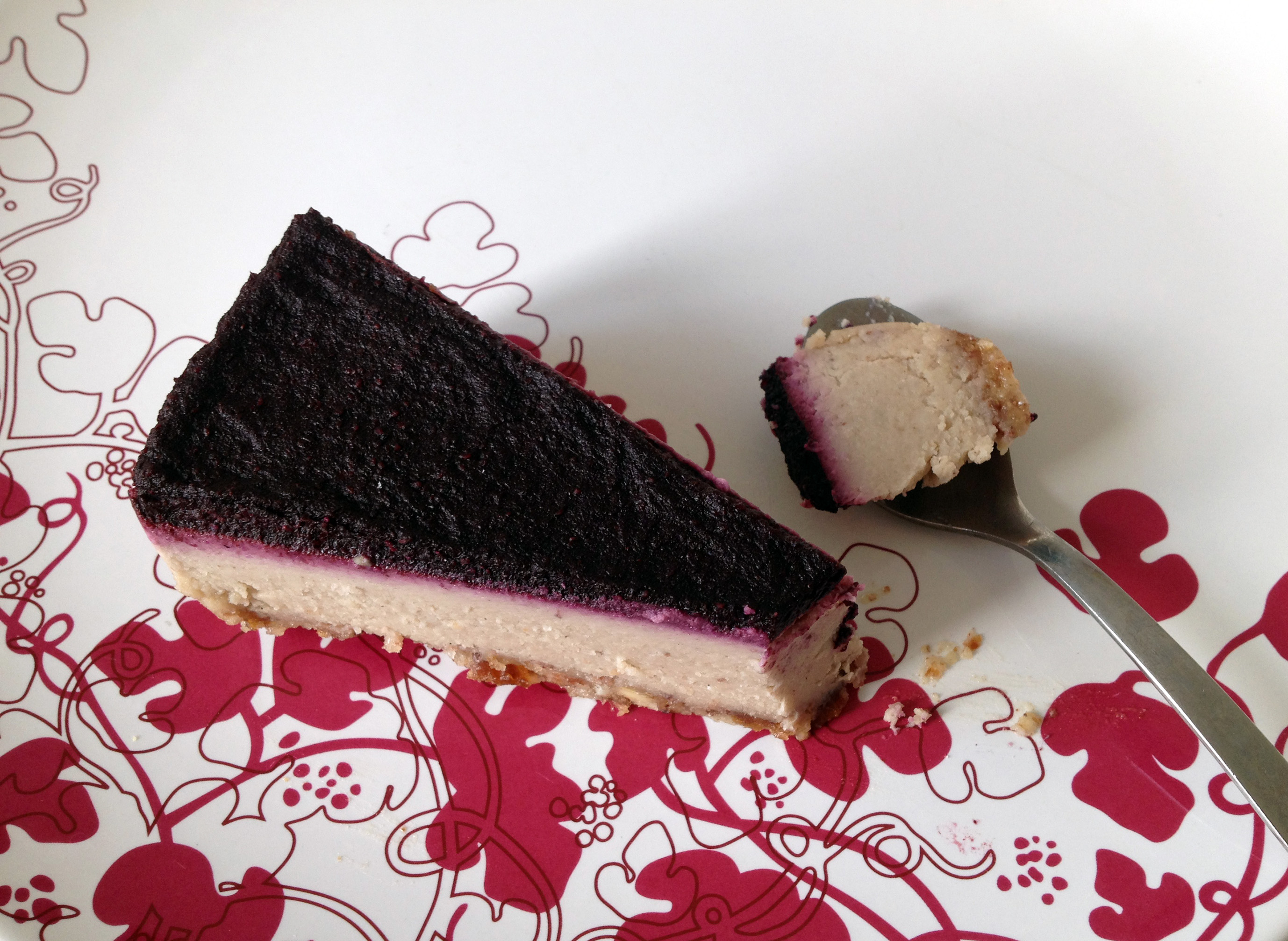 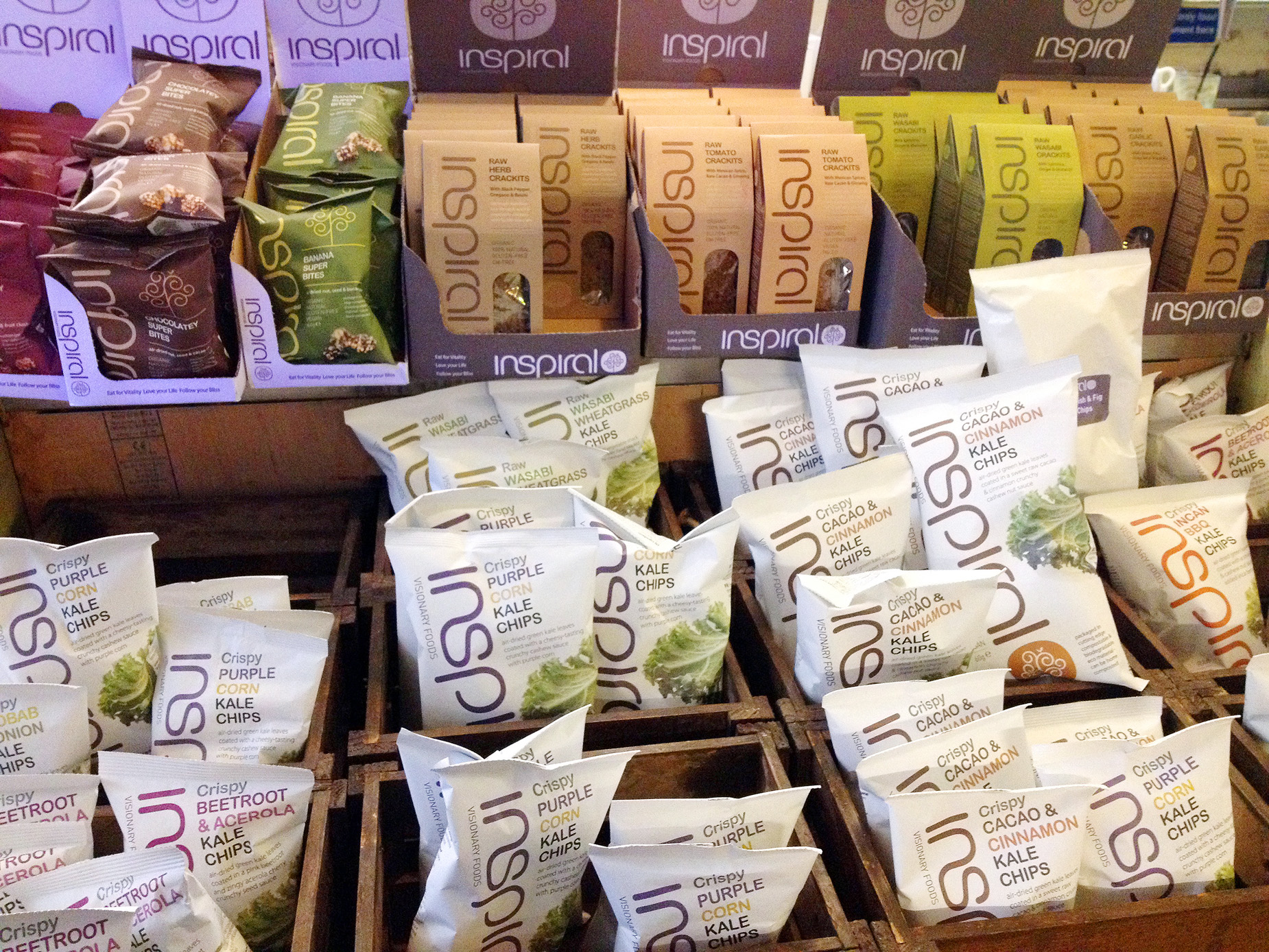 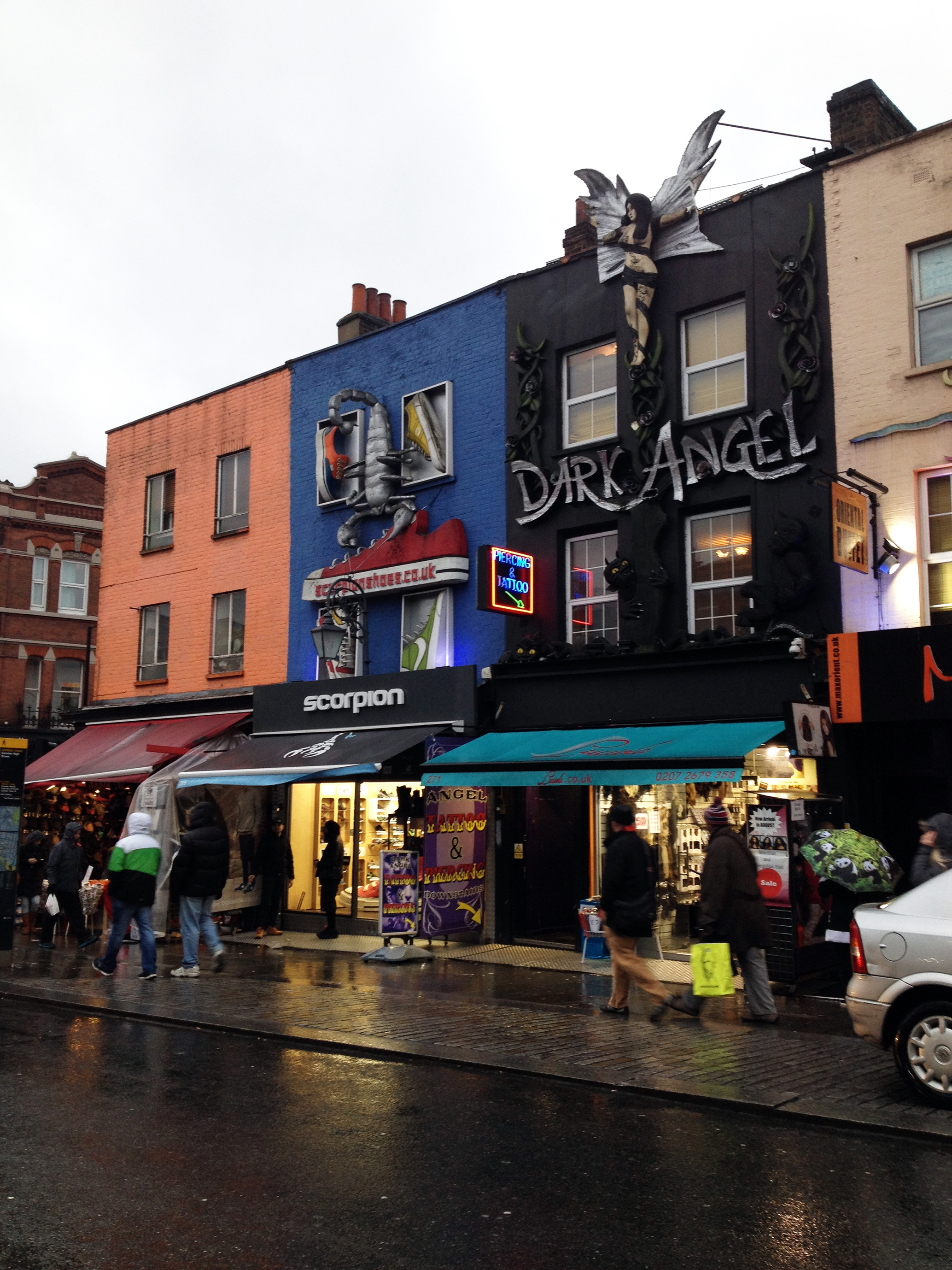